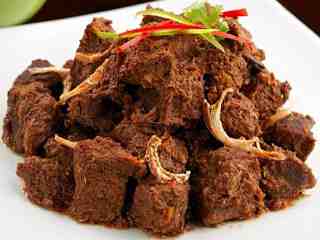 Onlythebestchoice – Rendang is one of the recipes of Indonesian cuisine that is very famous, not only in our country even to foreign countries.The recipe that originally came from west Sumatra has mushroomed and spread almost in all regions of our country.

With a combination of natural spices and meat frozen good quality, rendang recipes can be a favorite menu for our family.

The taste is delicious and typical derived from coconut milk and grated coconut roasted suitable for friends to eat rice almost every time, breakfast, lunch or dinner.

Rendang is one of the most sought after menus both in restaurants and in padang restaurants. It is only natural that this menu is much sought after by people in addition to its affordable price this menu does have its own appeal and delicacy which if we are smart in its processing can make us become eager to eat.

The problem is that not many people understand how to make a good and correct rendang so that the result is really delicious. Remember, in ancient times, people who went on hajj that took about a month to make rendang as a food supply because of its durable nature, the more often heated, the more delicious.

How to cook a good and correct rendang divided into three. First the processing of the basic ingredients is meat, be it chicken or beef. Both seasoning processing, third in terms of how to cook it.

1. Boil the meat until tender

The first processing of rendang making materials from the meat. Delicious rendang meat is tender meat with a soft texture. There are many ways to make this beef tender when making rendang, one of which is to boil the beef for a long time. For how long was the meat boiled?. The answer is very long until the texture is soft. It’s just how to boil beef that will be made rendang so that tender has a drawback that is in terms of time because it takes a long time.

Untruk get tender and tender meat that there are some tricks al:

Boiling beef, chicken, goat or buffalo before cooking is the simplest trick. It’s not like boiling takes a very long time. However, this trick can only be applied to some dishes, rendang, yellow seasoning meat or the like. The point is that dishes that use cuts of meat are not too thick.

It’s very easy. Before cooking, hit the meat with a jagged meat cleaver until it becomes slightly flattened. After that, stay cooked with seasoning according to taste.

In contrast to the previous way, by using a pineapple that has been smoothed (can be shredded or blended), can be applied to any type of meat and as thick as anything, guaranteed to be tender. And most importantly, cooking it does not take long.

The condition must be to use a young pineapple, not a ripe pineapple, let alone pineapple jam. Because, pineapple that is still easy to have a lot of potent bromelin enzyme content decomposes the fiber of beef, goat or buffalo. That way, the meat we cook will quickly become tender.

The trick, after washing thoroughly, balur the entire surface of the meat with a young pineapple that has been mashed. Let stand between 20 minutes to 30 minutes. After that, washed thoroughly so that the pineapple taste is gone, just cooked. Just a suggestion, while waiting for the texture of the processed meat to be tender, you can prepare a variety of seasonings needed for cooking.

The fourth way to make meat tender is to wrap the meat with papaya leaves. In order to get some benefits in one work, it would be better if before wrapped with the leaves, meat is seasoned first. The seasoning used can be adjusted to the needs. It is done so that the seasoning seeps into the meat. Because, after wrapped papaya leaves, meat should be left first more than 45 minutes.

2. Tips to make a good and correct rendang from seasoning processing.

In addition to meat and spices, coconut milk is the main element in the processing of rendang. Unfortunately many do not understand or ignore about how important coconut milk is thick in the manufacture of rendang so that a good and durable rendang is obtained. Diluted coconut milk will make the rendang not so tasty and not durable.

Somehow cooking rendang by using firewood either from wood charcoal or from coconut shell charcoal the result is much better than using an oil stove or gas stove.

The process of cooking the original rendang can take hours (usually about four/five hours), which is why cooking rendang takes time and patience. The pieces of meat are cooked together with the seasoning and the coconut milk is stirred gently until the coconut milk and seasoning are absorbed by the meat. The point is to keep the coconut milk from breaking, because if it breaks it will be free.

Once it boils, the heat is reduced and continues to stir until the coconut milk thickens and becomes dry. Cooking rendang must be patient and painstakingly awaited, always carefully flipped so that the coconut milk dries and the seasoning is absorbed perfectly, without scorching or crushing the meat.

Recipes For Delicious And Delicious Tofu and Sausage Pizzas!

Bali Fried Rice Cooking Recipes That Taste The Most Delicious!

No more pages to load.

Copyrights ©2021 OnlyTheBestChoice - Only The Best News Picks Latest And Updated